Let's say we have two websites in azure, one is a node.js website and the other is an mvc4 web application, both sites sources are in the same repository so we need a deployment script that handles differently based on which website it is deploying.

(a) First let's generate a deployment script for the node.js website:

(b) Let's generate a deployment script for the mvc4 web application:

At the root of the repository enter the command:

NOTE: You can also edit this generated file (deploy.cmd) with any custom steps you have, you can also test it on your machine simply by running it, it will publish your website to %REPOSITORY_ROOT%\artifacts.

(c) To decide which script should run, based on the website we are currently deploying, we'll use the "app settings" feature in Microsoft Azure Web Apps: 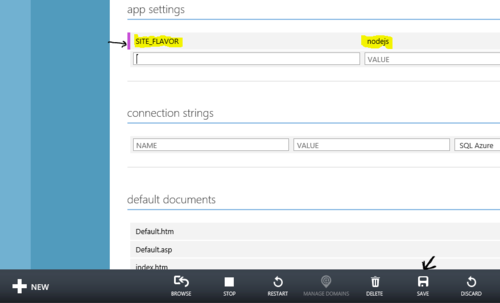 That's it, now we have a working mvc4/node.js website

NOTE: Another improvement we could do here is to store the repository on GitHub/Bitbucket and connect them to our 2 sites, now every time we push to GitHub/Bitbucket, both of our sites will be deployed.

The repository I've used can be cloned from here.